Study: 70% of Americans against NFL starting under social distancing 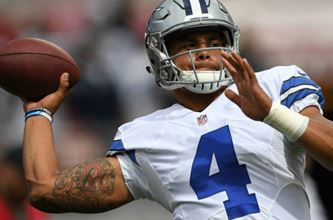 17 Apr Study: 70% of Americans against NFL starting under social distancing

Posted at 10:18h in Latest News by blinc
0 Likes
Share

Seton Hall poll shows 72% would not attend games before a Covid-19 vaccine is developed.

If current social distancing measures remain in place through September, 70 per cent of Americans believe the National Football League (NFL) should not begin its season, according to a study by the Stillman School of Business at Seton Hall University.

Currently, all major US leagues are in lockdown, with fears mounting that the NFL’s September start date could also be affected. The study also shows that 20 per cent of respondents believe the league should resume but allow the players to choose not to play. Only six per cent said the competition should begin as planned regardless of circumstance.

More broadly, asked what they would do if US leagues resumed play before the development of a vaccine, 72 per cent of those surveyed said they would not attend games, with 12 per cent saying they would if social distancing could be maintained. Only 13 per cent said they would feel safe attending as they did in the past. Among sports fans, the number drops to a still significant 61 per cent.

Medical experts in the US have put the timeline for approval of a vaccine into 2021, although they have not ruled out an existing drug proving effective for treatment this year. In light of this, 74 per cent thought it was possible, likely or very likely that sports would be cancelled for the rest of the year.

Regarding the postponement of the Tokyo 2020 Olympic and Paralympic Games to 2021, 84 per cent felt the International Olympic Committee (IOC) acted appropriately. Only 14 per cent said the governing body acted too quickly.

Asked whether teams have an obligation to pay daily arena and stadium workers for time missed because of Covid-19, 59 per cent said yes and 33 per cent said no.

The Seton Hall Sports Poll was conducted among 762 people across the US, with a margin of error of 3.6 per cent.

“This virus has the attention and respect of the nation,” said Rick Gentile, director of the Seton Hall Sports Poll. “Those who identify as sports fans, at all levels of interest, line up closely with the general population in regard to their own safety and that of the players.”