Time to dig deep for those who haven't had a good crisis | Blinc International
9854
post-template-default,single,single-post,postid-9854,single-format-standard,ajax_fade,page_not_loaded,,side_area_uncovered_from_content,qode-child-theme-ver-1.0.3,qode-theme-ver-7.3,wpb-js-composer js-comp-ver-4.5.2,vc_responsive 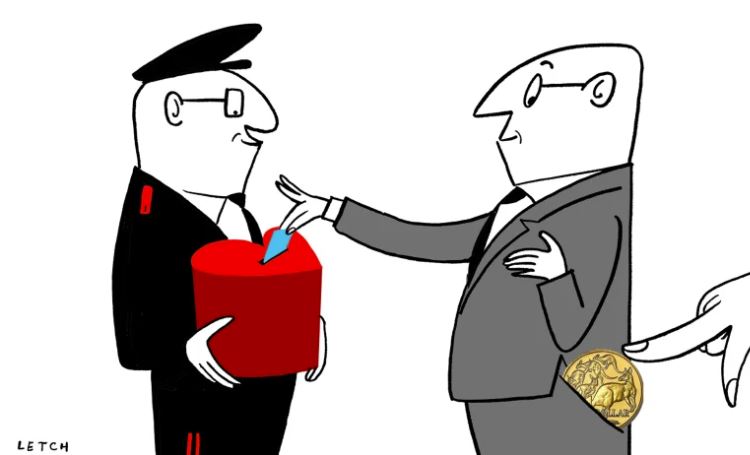 Posted at 13:12h in Latest News by blinc
0 Likes
Share

Do the initials EOFY mean anything to you? It’s a relatively new abbreviation, but it’s become so widely used by marketers anxious to squeeze in one last bargain sale before their books close that you probably don’t need me to tell you it stands for end of the financial year.

It’s also become a standby for our tax-deductible charities which, at this time of year, are busy mailing their supporters to subtly remind them that a generous donation or two in the next few weeks would do much to fatten the refund cheque that’s the reward awaiting us when we’ve submitted our tax return.

As an accountant who’s highly conscious of what’s tax deductible and what’s not – and who, in earlier times, did his share of knocking on doors, selling buttons on button day and rattling a collection box at the entrance to the show, but drew the line at helping his father sell the War Cry newspaper in pubs – EOFY looms large on my to-do list in the next few weeks.

It’s years since I’ve helped with the Salvos’ Red Shield appeal but, in any case, no house-to-house collection day was possible this year, for obvious reasons. Which is a pity since it means the Salvos will have a lot less ability to help those it always finds needing assistance, let alone the surge in families caught short by a recession likely to be still blighting many people’s lives long after Scott Morrison and Josh Frydenberg have triumphantly declared recovery and withdrawn their extra financial support.

Thinking about it, tax deductibility is a way that we mere mortals can oblige our political masters to divert more taxpayer support to those causes to which we attach more importance than the pollies seem to. And, if that’s your motivation, the knowledge that much of what you give will be coming back to you should prompt you to give a lot more than you first thought of.

Of course, the Salvos are far from the only charity caught short by their reliance on volunteer funding drives. A report published last week by Social Ventures Australia and the Centre for Social Impact at the University of NSW is a reminder that, apart from social distancing’s disruption of volunteering and fundraising events, donations always suffer when economic times are tough.

There are more than 57,000 charities registered with the Australian Charities and Not-for-profits Commission. Before the recession they employed about 1.3 million people – one worker in 10 – and had 3.7 million volunteers.

Charities provide a huge range of services to the community: education, health care, sport and recreation, legal services, arts and culture, animal protection, environmental protection and much else.

Governments also rely on charities to fill in the gaps in their systems. When the dole was only $40 a day – to which Morrison says he’ll soon revert – they could be sure no one would starve because the Salvos, Vinnies and Mission Australia would be there to give them a feed or a food parcel.

All those homeless people on the street? The Salvos, Vinnies and Mission Australia will do what they can. Maybe those people enjoy sleeping in parks and under railway bridges – especially in summer.

People who get themselves deep in debt with multiple credit cards and pay-day lenders? Not to worry. I hear the Salvos have an excellent financial counselling service.

Most charities have few reserves to fall back on when donations fall short. The report by Social Ventures Australia took a sample of 16,000 charities with 1.2 million employees and found that, should their revenue fall by 20 per cent, 88 per cent of them would immediately be making an operating loss, with 17 per cent at high risk of closing their doors within six months. More than 200,000 jobs could be lost as a result of cost-cutting and closures.

To be fair, the Morrison government has modified its JobKeeper wage subsidy scheme so as to include charities and their employees, though the scheme is set to expire in September.

Mitchell Evans, leader of the Salvos’ Sydney Streetlevel mission, says they are expecting “an avalanche of need in the months to come, as the government’s JobKeeper and additional funds under JobSeeker [unemployment benefits] conclude”.

His mission in Surry Hills has already seen a 60 per cent increase in demand for its meal services, and now provides 80 takeaway lunches every day.

At Major Brendan Nottle’s Project 614 in Bourke Street, Melbourne (where my cousin Barry is working), demand for emergency relief has now tripled to 90 people a day. “We’ve particularly seen more men coming to us for help, often with a mate, as they’re embarrassed and don’t really know how to ask for help,” Nottle says.

As Morrison cuts back to be sure of affording the huge tax cuts he’s promised high income-earners like me in 2024, kicking the tin’s the least I can do.